The calming words that came out of my dad’s mouth was a surprising thing to me. I thought he would be screaming at me for the first time because of my horrendous driving. Instead, he was calm and told me that I was driving great. Even though, he gave me some advice on the minor mistakes that I made, he loved the way of how I drove for the first time. He would do his best to keep encouraging myself to do better next time when I drive with him again. Throughout my driving lessons with my dad, I never argued and always agreed on the things he said of what I should do better next time. On the other hand, I heard my friends were trying to get their license before our other friends so that they can just show off when they get it. Although for myself, I was patient and determined to get my driver’s license. My mom taught me how to be humble and patient in life. Good things will always come if you are in those ways. As soon as I finished my lessons with my dad and started taking the 7 day driving test with my instructor, I passed and was able to get my driver’s license. I thanked my family for the help and especially Mario Kart.

Mario Kart is my first life learning experience. Mario Kart is the game where you can get the first feelings of driving when playing the game, the competitiveness, teamwork, determination, and how to be persistent in life.

Mario Kart is the game to have the first feeling of driving. In USA, we are the youngest people in the world to acquire our driving license at the age of 16. On that note, Mario Kart is the best teacher to teach how to drive for the youngsters and at the same time to be an entertaining game. You learn how to drive without realizing it at a young age as elementary kids. The more you play, the more you realize of how to be focused on the road. The evolution of the game from GameCube to the Wii U improved the content and qualities of it. It has added more characters to its roster. On the Wii while you play, you have the actual feeling of driving than playing it on the GameCube. You can use the game wheel with the Wii Controller remote in it when playing the game. The sensation, vibration of the Wii controller remote, and ability to move the wheel is a great way to gain ideas of how to be a better driver without crashing in real life situation. I started playing it for the first time with the GameCube version. The Wii version really helped me to have more confidence to drive better. 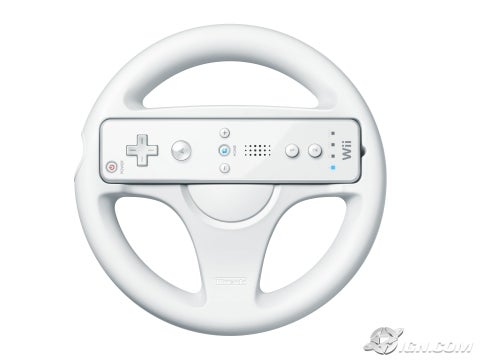 The idea of what to do while driving in the game helps you to gain concepts about driving. It helps you to gain knowledge of situations to avoid when you get hit by an item that a user throws at you, like a banana or a green/orange shell. When avoiding it, you’ll be able to practice for real life situations to not get into accidents when something is coming in your way. Plus in the game you’ll be competitive against the CPUs. In real life, it happened to me once while I was driving and suddenly a kid on the sidewalk slipped his skateboard from his hand and it just got in front of the left side of my car. I had the right reflex to avoid the skateboard. The Mario kart game helped myself and others to be smarter and focused on the road hazards.

The competitiveness is actually great to learn from Mario Kart. Everyone will always have to compete with somebody in their life. In different levels of Mario Kart, you can choose the difficulty of the CPU which you can compete and play against them to practice and/or play for fun. It’s useful to gain the knowledge of how to compete with other people in different situations. Without obtaining the knowledge of how to be competing ,with other people depending on the situation, you would not be able to perform at your best.

For example, let’s say you already learned how to be competitive by playing Mario Kart, it will help you to do your best all the time. In school, it helps you to keep going and do your best until you get the best grades. It is important because in the world that we live in, everything is available at the touch of a finger and the world is more competitive than it was at the time of our parents. Mario Kart is the best teacher to get the best of us. When all these video games started, parents were against it. But my mom realized how helpful it was for me. I was allowed a time to play every weekend on Friday and Saturday only, no weekdays. Mario Kart is the game that helps a child to discover the best in them. Even if it is in the virtual world of Mario Kart, lot of features like team work applies to the real world. In life, you need to work as a team with people you either know or don’t know depending on the situation.

As a kid when playing Mario Kart I learned how to play as a team and how to socialize. When I played in a level that I choose my own partner in a race that we would have to collect the stars, I asked my friend to go in certain positions and attack with an item when one of our opponents is nearby a star. When you are working in teams, you share your ideas and come to an agreement. Without working in teams depending on the situation, it’ll be difficult to do the work on your own. Sometimes it helps to work in teams. If not, the difficulty would be hard for yourself. You have to be determined to succeed in life. It teaches you how to choose good friends that you can trust. Also with those trusted friends, you can learn how to work as a team. I learned also how to adjust myself sometimes to my friend and also to convince my friends on accepting my opinion.

Every video game has a goal-oriented objective. In life, we have goals to achieve. Somewhere in life, we have to learn how to achieve the goals. That’s the beauty of learning from a video game. To achieve the goal, we have to be determined in the game to achieve it. When I started playing Mario Kart for the first time, I would acknowledge that to win the race I would have to be determined to win the game. To be able to win the game I used to practice and try to beat my time every time I played. I was determined and persistent to do my best every time and improve until I got to my goal.  Without determination, how are you able to achieve your goals in life? Creating goals is actually useful because with doing so, we can prevent situations that’ll be harmful to a person’s life. For example, texting while driving is a common terrible thing people and teenager are doing now these days. 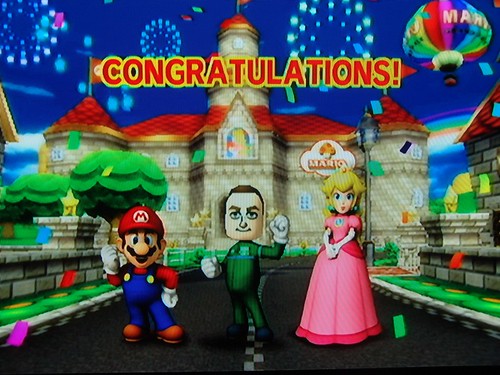 An article I found is pretty interesting. The author talks about how texting while driving is obviously bad. So the author created a study that contained 9 people who were willing to play Mario Kart and text while playing in exchange for a taco night. The volunteers were a mix of young adults, children, and parents. Each of the participant completed three laps using Toad with his standard cart on the level Moo Moo Meadows. The experiment would be first tested by driving around the laps without texting. Then the laps would be completed while answering one text per lap. The time would be compared without the texting, with the texting, and the number of collisions they had while they texted.

The average time of without texting was 2 minutes and 3 seconds while the average time of with texting was 3 minutes and 31 seconds. The subjects showed that with texting, they had an increase in collision with collisions, reduced speeds, and at least one player started driving backwards. The study concluded that basically do not text and drive while playing Mario Kart and in real life too do not text while driving. When texting while driving, you can hurt yourself and others. It is a wonderful study to make youngsters realize how bad it is to be texting while driving. Our generation and future generations live mostly in the virtual world. It is amazing how helpful this study is because it is explaining the new generation with their tools which is the Mario Kart game, a virtual world, the danger of texting in the real world. 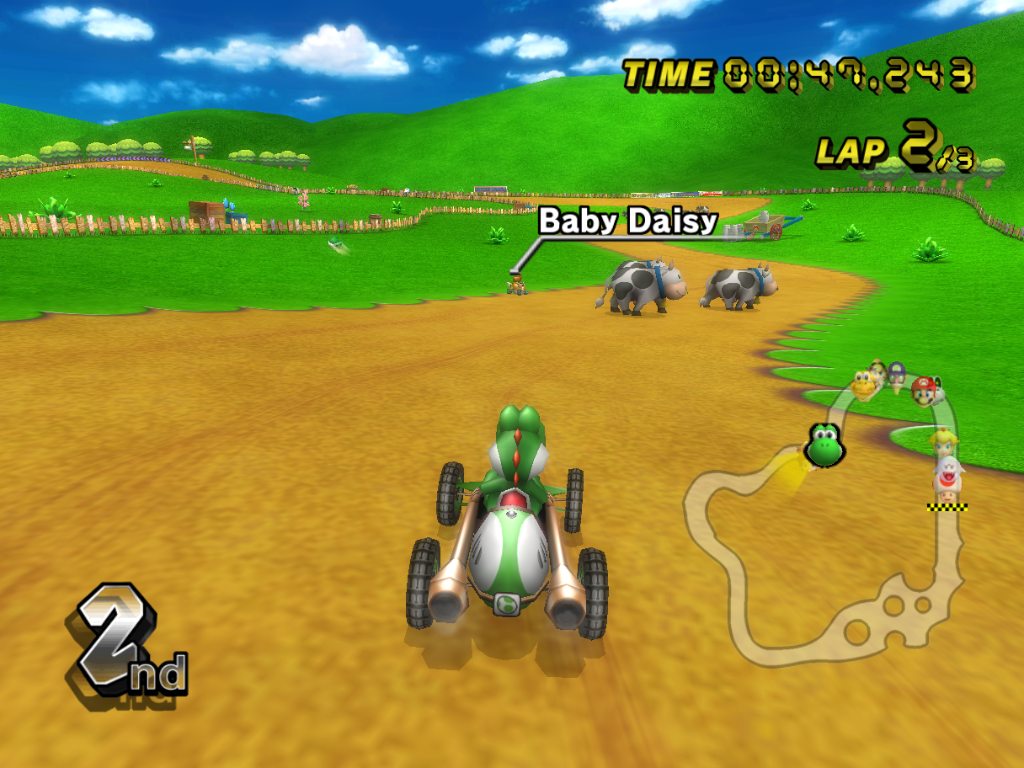 Eighty two percent of Americans age sixteen to seventeen own cell phones. Thirty four percent have admitted that they were texting while driving. Fifty two percent have talked on a cell phone while driving. In 2011, at least twenty-three percent of auto collisions involved cell phones. That’s 1.3 million crashes. This has to stop. Lives are being lost because of a couple words in a text. People have been in the car with the driver while he was texting and driving.

Forty percent of all American teens said that they have been in a car while the driver used a cell phone in a way they felt they were in danger. People should realize by texting in the car, it’s a distraction and you would be risking other people lives. The thing that’s helpful from learning Mario Kart is that you have to be persistent in life. With playing the game, you’re able to realize that if you don’t crash in the game, you’re able to go ahead in the race. But if you crash into something, it’ll slow you down and force you to be behind in the race. So to relate to reality, texting is a distraction so it’ll slow you down when driving and it’ll lead you to crash into something. This study proves how much Mario Kart is the best tool to teach children of how to drive and also the danger of texting while driving.

Mario Kart is the most entertaining game that exists in this world. People of all ages play this game, especially children who are attracted to this game because of its characters that looks very friendly and it is an easy game to play. Mario Kart helps people to learn the experience of life when the player realized the desire to win. Then all come by itself, the first feeling of driving when playing the game, the competitiveness, teamwork, determination, and how to be persistent in life. Mario Kart changes the player’s world by wanting to do the best every time which is very addicting. This game is on Wii which is better than the PS3. You can play online but the best thing is to play with a friend sitting next to you. Having the time of your life with a friend on your side and not play online is another fun thing to do. In the PS3, mostly I play with my friends online. Mario Kart is amazing because I play with my friends that are sitting next to me. Mario Kart has taught me on how to socialize with friends because I had friends who were not always happy to lose so I had to learn how to compromise with them. I learned the basics on how to drive, be competitive and also be able to socialize friendly at the same time. That is the magic of Mario Kart. It gives you a life learning experience.

← Willingly Locked In
Tales of Symphonia: Grasping Close to the Heart →