Back in late 2014, Bungie, creators of Halo, released a new futuristic game called Destiny.  Many fans of Bungie were riding the hype train to supposedly one of the best games of the year.  However, when the community dove into its story missions, or campaign, many of us were very dissatisfied.  The released game before DLC was a short 8-10 hours maybe with very little and vague story telling.  Even with the Dark Below DLC there was maybe another hour of missions, not including the new Raid, and slightly less vague story telling.

The Bungie community was wondering where all the story and lore was and the answer to that most of it is not in game. If you want to know the massive majority of the game’s lore, you have to go online to Bungie’s website and look at something called the Grimoire Cards.  In order to obtain these cards is by doing certain tasks or finding dead ghosts in game.  After obtain the cards you can read them and you would learn the lore behind the Destiny universe.

Another way to get a small glimpse at some lore in game is through Raid gear and some exotic weapons and armor.  We are able to read this in the weapon and armor descriptions.  In game you fight an enemy known as the Vex.  When you do the Vault of Glass raid, you have a chance of getting armor or weaponry.  Specific to the Titan class, you get armor pieces with the name “Kabr.”  Each piece of armor has a description of Kabr’s time in the Vault of Glass and gives an idea of what happened to him.  The descriptions are: helmet “Kabr fought the Vex alone. But somehow they didn’t kill him.” Chest “In the aftermath, he became obsessed with the machines.” arms “He consumed their technology like fire. Fashioning armor from their remnants.” and legs “He was claimed by the Vault. His armor and myth are all that remain.” 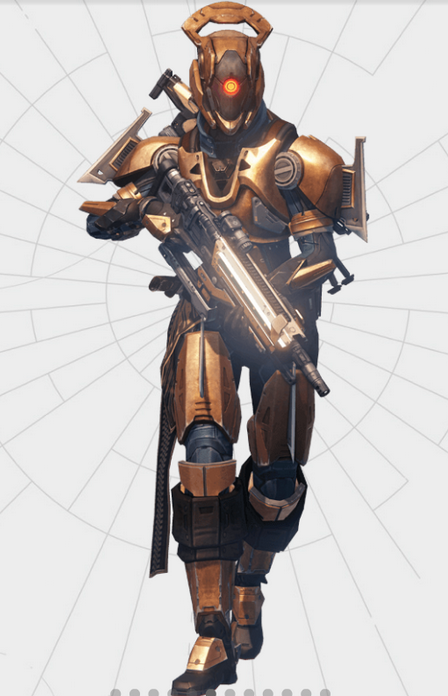 The lack of in game story has created a small community of people that piece the scatter lore together and release it for people to read or watch.  One specific Youtuber, Sir Wallen, release videos every so often talking about various lore topics in Destiny such as the enemies, factions in the city, races, the Darkness, the Traveler and even lore that is not part of game dialogue in context of the Traveler versus the Darkness.  An example of one of his videos discussing Kabr time in the Vault and the corrupting effects of Vex armor [youtube]https://www.youtube.com/watch?v=UyEbN-rpdAs[/youtube]

The Destiny universe is massive and incomplete.  There is a lot of stuff that we know right now from the few in game sources and the Grimoire but there is so much more to come.  The lore in Destiny has been presented to us is in a different form that what we are used to.  We expect if to be giving to use through cut scenes or in game dialogue between characters or other sources.  However in this game it is different than what we are all used to and the gamers that have bought this game are not to pleased.  It would be wrong for people to say that the lore is nonexistent or very small, but correct in that is more difficult to obtain.

← Twilight Imperium: A Complicated Mess, or a Brilliantly Crafted Universe?
The Success of a Puzzling Professor →