The remastering of classic games is often the source of a great deal of excitement for fans of the original games and newcomers alike. For devoted fans, it’s a chance to replay beloved games in high-definition, and, for newcomers, it’s the opportunity to finally play lauded games on more readily accessible consoles. Two prime examples of remastered collections include the God of War: Collection (featuring God of War I and II) and the Metal Gear Solid HD Collection (featuring Metal Gear Solid 2, 3, and Peace Walker), both of which were widely celebrated for their enhancing of the original games’ resolutions to 720p, while maintaining smooth frame rates and leaving game mechanics and stories unchanged.

Following the success of such collections, game developer Konami decided to follow the trend and remaster two of their own classic games: Silent Hill 2 and Silent Hill 3. While the decision was met with some confusion — much of which surrounded the absence of the first Silent Hill despite its popularity and relevance to the plot of the third game — there was still an air of hope for many. After all, the possibility of seeing the Silent Hill universe’s trademark haunting atmospheres, terrifying monsters, and unsettling textures in HD was a truly thrilling one.

Tragically, however, this hope was unceremoniously extinguished upon the collection’s release, with bewildered fans finding the remastered games to be a host of terrible and often baffling problems that affected their visuals, audio, and gameplay.

Where fans expected elevated visuals, they found only poorly rendered messes. Much of this stemmed from the fact that Konami’s Hijinx Studio chose to use incomplete source codes for Silent Hill 2 and 3 (as Konami had somehow lost the final source codes) for the games’ remastering, rather than simply reverse-engineering the retail data of the original games from discs, as was done for the other previously mentioned remastered games.

Beyond resulting in several bad, polygon-laden tragedies, the alterations caused by the poor debugging and remastering also dealt a considerable blow to the atmosphere for which the Silent Hill series has become so famous. For some reason, developers chose to often remove the heavy fog that swallows much of the games’ settings, thus removing the otherworldly and isolating feeling the fog created. Likewise, the grungy, disgusting textures prevalent throughout the games were removed (with roads and walls appearing remarkably clean for a decaying nightmarescape) and an odd blur texture was added to many cut scenes.

While some horror was removed by the odd design choices, new, unintentional horrors were added through mixed-up textures, such as the now-infamous “teeth eye,” which is better seen than explained. 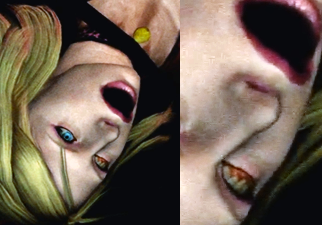 In terms of audio, the remastered games did not fare any better. Strange choices were made in terms of the music, with the acoustic guitar in the opening scene’s song being replaced with an electric guitar, musical pitches being altered, and various songs stuttering at their loop points. Even more baffling is the fact that some sound effects were jumbled, with the sound of footsteps playing when there should have been the blast of a fog horn, and the sound of one character’s footsteps on metal grating being replaced with the sound of a loudly clattering gate to an obnoxious and distracting effect. Most criticized, however, was the fact that, because the developers chose to record new voice-overs, the new actors struggled to match the lip movements of the characters and the dialogue audio was often disastrously out-of-sync.

Even in terms of story and gameplay the remastered games were not safe, so marred were they by bizarre alterations and glitches. In particular, a strange two-second fade from black was laid over every custcene, resulting in the beginning of each scene being replaced by blackness (and also resulting in the complete invisibility of a particularly short scene). This fade from black is also present every time that the player exits their menu screen, resulting in two seconds of complete vulnerability if the player paused during a fight scene. Also jarring is the degree to which the game often lags, with characters often moving so slowly that parts of the game are nearly unplayable and combat feels impossible. Other issues include glitches in which, randomly, the player may walk through a doorway and find themselves in a black abyss, scenery disappears, and objects constantly clip into one another.

Overall, Konami’s usage of incomplete source codes in its remastering technique, the developers’ bizarre artistic revisions, and the wide variety of overlooked errors and glitches resulted in a product that not only devastated fans, but garnered a great deal of poor press for the company. One reviewer stated that, “incomplete, glitchy, and visually degraded, Silent Hill HD Collection is Konami’s greatest insult to the series,” while another warned that “unless you want to experience a butchered version of Silent Hill 2 and a somewhat decent Silent Hill 3, don’t buy this collection” (Sterling) (Sheard). And, though plenty of reviewers gave the collection lukewarm reviews, the fans maintained a notable animosity towards the remastered games and the developer of the original games, Masahiro Ito, sent out a series of upset and critical tweets. Even with patches (most of which are inefficient), the damage of the Silent Hill HD Collection was done and many fans came away with the feeling that Konami had long since stopped caring about one of its most influential creations and the people who loved them.