Bayonetta: Intense Visual Action With A Side Of Comic Relief

Bayonetta is an incredibly sarcastic 500+ year old Umbra witch who uses her hair as a gateway to hell for summoning massive demons that rip apart her opponents. Not cool enough for you? She’s also just woken up into an extreme war between two witch clans (the Umbra Witches and the Lumen Sages) that has begun to wreak havoc and left the world to a frenzy of relentless demons and angels fighting with the aim to destroy anything that stands in their way. Lucky for the players of the game, you are playing as Bayonetta who can be equipped with weapons in both hands AND feet, not that it’s a huge deal considering she also performs demon summoning with her hair and torture magic.

When first seeing this game, the demo was enough for me to gawk at every move the player made. Even blocking was a beautiful sight as you see her flip away and slow time using “Witch Time” to slowly crush her opponent in high 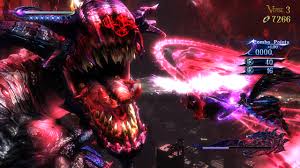 definition, flawless digital imagery. I have always hated being the person to only sit and watch others play a game, until now. Every move and image that is played has so much put into it that you can’t help but want to play it over and over to rewatch the details of her making enormous torture devices appear out of nowhere and kick her opponents into them. Not to mention the demons she summons and fights tend to be ornate and as large as an apartment complex. I actually traded back and forth with friends to see who could get different combos so we could just all see the action packed moves and tricks and get all of our “Ooo’s and Ahh’s” out.

That being said, being a high powered action game can leave small room for a well developed plot. Although, with personal understanding of how drag Japanese action plots can get, I saw Bayonetta‘s plot presentation as quite entertaining. Action stories/games have never been in my highest interest, but Bayonetta presents it in a new form by allowing the player to learn the plot and be entertained by unexpected humor and snarky remarks as they play rather than having to sit through a long video narrative of the story. Bayonetta doesn’t remember her past, your job is to play as her and find out what that forgotten past was with the heroine. Each presentation of the plot unfolds in short bursts with some enjoyable comic relief added in at every open corner. The humor is the best addition for this over the top action packed game any developer could have made. With so much serious war and fighting going, comic relief is a must for those that reasonably can’t take non-stop seriousness in a game. In war, there can be play. Otherwise, the game is just too serious to enjoy. Humor just adds to the entertainment aspect of playing this game, because you are constantly waiting for the next smart alike or sarcastic poking between characters.

Gaming in action-packed war settings can get depressing. All you find is death, destruction, and more death. Especially in games that can get excessively gory, sometimes you need a break from it. Most games do not provide the luxury of getting that break from all the macabre unless you stop playing altogether for a breather. That is where a higher respect for the incorporation of the sarcastic undertones in each plot development in Bayonetta comes in. After fighting a huge battle against a demon boss (possibly more than once), players tend to be quite flustered and lose their ability to appreciate the plot clips because they are just ready to get to the next frustrating battle. The addition of jokes to the game allows players to lighten up before the next battle and be reminded that this is for entertainment, not their next ulcer. 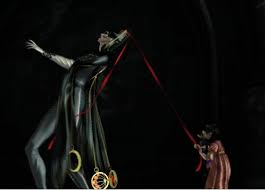 Besides the funny dialogue that takes place in Bayonetta, there is also an addition of occasional cracks from the developers at other existing games. Any gamer that has knowledge of Sega games can appreciate when games such as The legend of Zelda are hinted at in Bayonetta through imagery or verbal sarcasm. Playing the snarky comments in the game at the opportune moments is part of the magic. Any player hearing the same joke over and over because they keep dying and having to relive it will kill its humor immediately (and possibly anger the player more). By leaving all of the talking for after each battle or between new levels of a battle, Bayonetta saves the game developers from a flop comedy attempt and the players from losing interest. 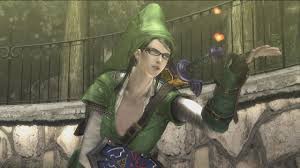 (Bayonetta in Bayonetta 2 dressed as Zelda)

3 comments for “Bayonetta: Intense Visual Action With A Side Of Comic Relief”