Quest for a Better DLC 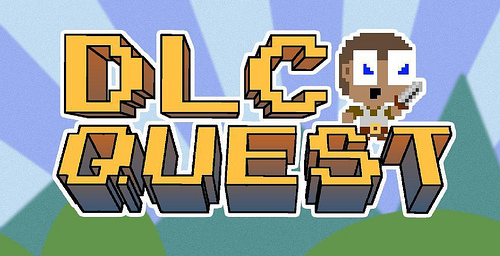 Earlier this week I was watching a friend play the game DLC Quest. This game seemed determined to embody many annoying aspects of games such as excessive back tracking, constantly needing upgrades, and requiring you to buy a DLC pack for even the simplest of things. My favorite parts were when the game poked fun at nonsensical happenings in games – a spiraling random encounter screen explained by the villain just as what ‘always happens’ when someone comes across him or the main character, called Player, refusing a side quest saying “I don’t even know you. Solve your own problems. I’m busy.”

As entertaining as it is, DLC Quest makes a seriously point about the prevalence of Downloadable Content in games these days. DLC Quest uses excessive examples such as a DLC allowing you to move left and jump, a DLC to double jump, a DLC map to advance through a forest, and a DLC map to backtrack through the forest at night. They have the ever popular Zombie DLC and a spiffy Top Hat DLC. There’s also the Horse Armor DLC which, ridiculous as it sounds, was a real DLC released for Oblivion.

Cracked.com made a list of The 10 Most Insulting Things Video Games Charged Money For, in which Oblivion’s horse armor is number ten. The items listed here are among the many silly things game companies have offered to gamers for real world money.

Downloadable Content is also being used as preorder incentives. Preorder and get X mission for get X outfit/skin/weapon. I don’t necessarily have a problem with preorder goodies, but I don’t think you should have to bribe your customers into buying a game.

Extra missions are commonly sold as DLC. Some of these are fun, some of these not so much, and some of these include important plot points. Take Assassin’s Creed Revelations’ The Lost Archive DLC for example. This one is a personal annoyance of mine. I guess I should say spoilers? But I mean the DLC is now over a year old and the plot point I’m mentioning gets a nice quick sound bite of recognition is Assassin’s Creed 3 so…

The Lost Archive followed the life of Subject 16, Clay Kaczmarek, Desmond Miles’ predecessor. At the end of the game prior to Revelations – Assassin’s Creed Brotherhood – Desmond fatally stabs Lucy, another major character. It seems completely random. The Lost Archive reveals that Lucy was in fact a Templar, the main group of antagonists. This is mentioned briefly in Assassin’s Creed 3 but could be easily missed and is confusing if you haven’t played the Lost Archive or looked it up online. This bugged me to no end. I had to pay to discover an important plot point.

Then there’s Dragon Age’s Warden’s Keep DLC, also mentioned in the Cracked article. You’re invited to take back the Warden’s Keep. Should you accept the mission without owning the DLC, you’re then prompted to buy it, completely breaking any immersion and leaving a bad taste of desperate marketing in your mouth.

DLC Quest doesn’t necessarily make you buy DLC packs containing parts of the story, but it makes you pay to advance the story. DLC Quest satirizes the idea of releasing a DLC for everything and making it nearly essential to download content to enjoy a game. It’s amusing in DLC Quest, but good God is it annoying in real life. It’s a bit insulting actually. You pay sixty dollars for a game that isn’t even really complete. You then shell out more money for more ‘optional’ quests which may actually contain important information. Then there’s the gimmick of different skins or outfits or weapons. Don’t develop something for the game then cut it out to sell to me at a later date, a majority of which looks promising but turns out to be a let down.

DLC isn’t going anywhere any time soon. That’s something we as gamers have to accept. What we don’t have to accept is low quality content or content that rightly belongs in the main campaign of a game.

2 comments for “Quest for a Better DLC”