Many of these games are not just simply games one plays for “fun.”  These games serve as a learning tool which assists children with a variety of skills including the development of problem-solving skills, generating ideas in creativity, all while having a good time.  From personal experience I realize the importance of video games as well as PC games and their educational nature in helping a child who may be behind in school.  My son was recently diagnosed with ADHD and was at risk for retention, retention means that he was not doing well in school, so he is at risk for being held back a grade.  A game in which his teacher recommend was a computer game called LEXIA.  The LEXIA software has assisted both students and teachers in my son’s school was LEXIA.

Specifically, LEXIA has “has been found to accelerate the development of critical foundational literacy skills in elementary and ELL students. It has also been shown to be effective in re mediating struggling readers in middle and high school” (LEXIA).

Ideally, many schools have already gotten on board with educational video games as well as those parents who home school.

Other games which are in demand that can assist children are such games as Reader Rabbit: Math Adventures. In this particular game, your child is taken on an adventure via their 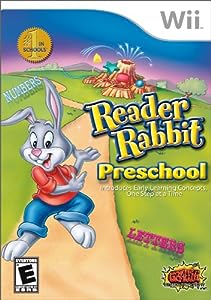 This particular game assists the child in reviewing math concepts at the pre-K level in the in introducing math related themes in preparation for Kindergarten.

The question that is relatively scathing in regards to “video games,” in the classroom is are they educational enough?  The answer to this question lies in the context of how the video game is set up and how it attracts the child’s attention.  In a study sponsored by the United Kingdom’s TEEM, Teachers Research group, their study found that “adventure quest and simulation type games have a lot of benefit–they’re quite complex and create a context in which children can develop important skills”(BBC News).  In addition, this study also demonstrated how 70% of teachers have stated that video games have improved their students engagement in the actual learning material.  In contrast, some teachers have reservations on using video games in the classroom, due to the fact that they fear that students will forget the actual material which is being pressed upon them to absorb and become infatuated with the video game itself” (BBC News).

In terms of child development, I believe that video games can maintain an alternative purpose other than leisurely play.  The key to introducing video games inside the classroom is a challenging concept. The reason for this is because there is still  a large stigma and doubts attached to video games.  Specifically, many educators challenge video games in the classroom because they wonder if the game is challenging enough to children or whether or not the purposed educational video game corresponds with the actual curriculum which is being taught inside the classroom.  These are obstacles which educational video game developers must overcome.

In terms of belonging inside of the classroom, educational video games seem to benefit those younger groups of students.  Primarily, in the Pre-K, Kindergarten and elementary school grade levels.  The reasoning for this is because this age group in particular is highly familiar with the use of electronic video games and technology.  With the advent of technology more and more people are using their consoles to not just play games but to stream video via Netflix or to watch a DVD on family night.  Therefore, more and more children are being exposed at a younger age to electronics as well as video games.  Therefore, it is important to incorporate such technology in the classroom and to investigate their beneficial qualities as not only leisurely items but in viewing the game console as an educational tool as well.

← Sword and Sworcery
“I want a sword too!” Heroines in E-rated Games →

2 comments for “CHILD’S PLAY: Educating your Children through your Console”